It’s not that he’s not into you, It’s just not that good a film. 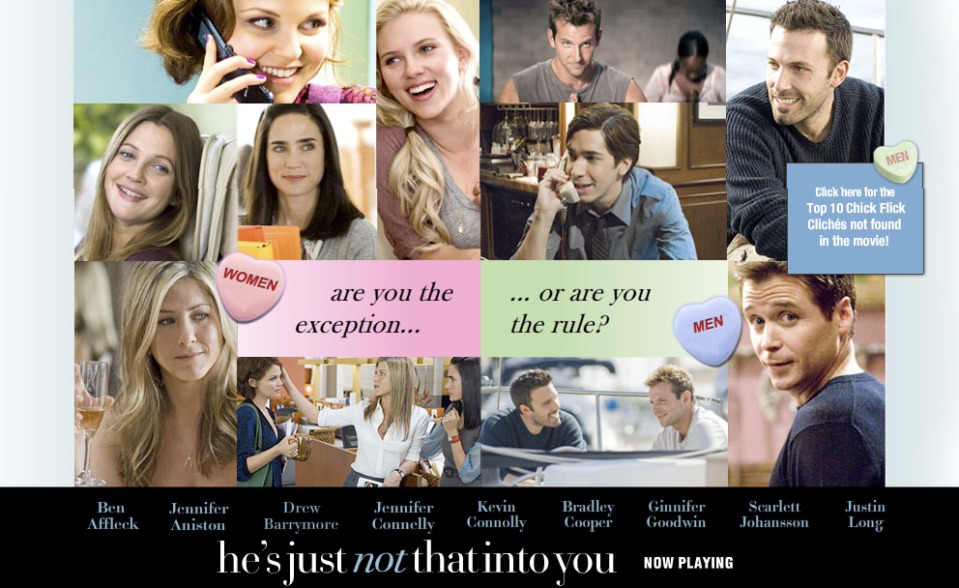 I was reading the book almost four years ago at a time when i was in the midst meeting someone that really was that into me – according to ‘The Book’.  So, when I heard there was a film being released with a star studded cast including Jennifer Anniston, Ben Affleck, Scarlet Johansson, Kevin Connolly, Jennifer Connelly and Drew Barrymore, I was keen to see if He’s Just Not That Into You the movie was any good.  So last night, as in similar form with Sex And The City the movie, myself and a gaggle of girls went to watch it.

Despite heavy Americanisms, the book itself holds a truth that every girl seems to constantly avoid when dating.  If he’s not calling, if he’s not sleeping with you, If he’s not marrying you – he’s really just is not that into you.  It’s that simple and it’s a motto that all girls should seriously adopt and pronto.  Stop checking your phone for missed calls and messages six billion times, clinging onto the hope he’s going to call (whether your care to admit it or not, we’ve all done it).  If he liked you, he’d have called.

The movie focuses on three couples at common relationship stages and one womans quest (Ginnifer Goodwin) to find love.  Jennifer Connelly and Bradley Cooper (of Yes Man fame) are married in the film.  Scarlet Johansson and Kevin Connolly are friends ‘with benefits’ and Jennifer Anniston and Ben Affleck’s characters are childhood sweethearts.  Drew Barrymore’s quest for love seems to be an almost secondary story to the film.  The characters all follow a journey to find out whether they follow ‘The Rule’ or are ‘The Exception’ to it.  Without giving too much away, there are some very funny, some utterly truthful and some heavily unrealistic scenes (but we all need a happy ending to make a good film right?).

Essentially, I was heavily disappointed with the film version of He’s Just Not That Into You which I suppose, as a horror fan as opposed to rom com, isn’t too surprising.  Whilst the advice simply couldn’t be more true, if you haven’t read the book, my advice is to buy it now, skip the film (unless you really aren’t getting the message) and hold true to the advice offered from both.

← Crazy Cousinz feat Kyla – Do You Mind
Radio One Live Lounge: The Fray – Heartless and a little man called Kanye →