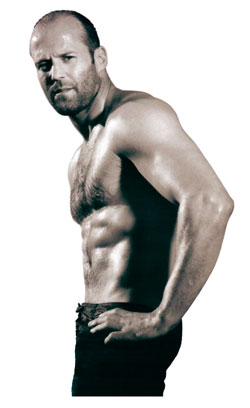 Whilst i’m not one to be shy so to speak, there’s a certain prerequisite in society that prevents people from being their true self a lot of the time. At work, in the presence of someone new, at an interview – probably more than you realise. But everyone has a guilty secret right?

On my way to work, I was pondering this thought. This included thinking that what I considered a perfectly non-guilty secret, is probably not considered so by some others. At which point I thought, ”well, who cares what other’s think, right?”. It also happens to probably be more of a dirty secret (or as of the next paragraph, not so much of a secret any longer).

So, here it is: I shamelessly love Jason Statham films and for one reason and one reason only; the man himself.  Beefed up, covered in dirt, gravelly voice and all. Yes, most of his films (including the recently watched Death Race) are utterly awful but for me, well, let’s face it, it’s not exactly about the plot.

So there you have it; Guilty Secret mark one – of probably a thousand others. Which prompts me to ask the question, what’s yours?

After all, maybe a guilty secret shared is a secret halved of guilt…

8 thoughts on “What’s your guilty secret?”